Our Story Nesselrod on the New

In 1916 Dr. Minor Wine Thomas and Grace Nesselrodt married in colonial Williamsburg. Dr. Thomas had been working as a Psychology professor at the College of William and Mary. The couple moved to Radford during the depression as Dr. Thomas continued teaching Psychology at Radford College. During their trips back and forth from Williamsburg to Radford, Grace Nesselrodt Thomas noticed a home in Bedford County designed by Everette Fauber who had helped design the Governor’s Palace in Williamsburg.

The couple purchased 9 acres in Pulaski County from Dr. Bob Hopkins and built the home in 1939. Mrs. Thomas gave the estate her personal touch by naming it “Nesselrodt-on-the-New”. The 2,700 square foot home combines Colonial Revival elements with a modern room layout for the 1930’s. Symmetrical design of the house showcases a large central chimney, three gabled dormers and a slate roof. The exterior veneer of the house was built with stone that Mrs. Thomas had brought over from the Radford train station when it was decommissioned in the late 1930’s.

Architect Fauber then began designing the Sunken Garden in a natural depression east of the house and along Madison Street, which was removed in the early 1990’s when a new bridge was constructed connecting Radford and Pulaski County.

While the couple stayed active in the community, Grace Thomas became well known in the area for the cakes she would make at Nesselrodt. People visited Mrs. Thomas on a regular basis to sample her terrific cakes and enjoy the beautiful estate grounds. The couple also raised their family here of 3 children, one of them using Nesselrodt as their wedding venue in 1954.

In 1997, Dr.’s Hal and Cheryl Gillespie purchased the estate along the banks of the New River. Dr. Hal Gillespie was a psychiatrist and Dr. Cheryl Gillespie was a Psychologist and both operated their own practice just a short walk away from Nesselrodt in Fairlawn. While updated the estate, the Gillespie’s opened the “Nesselrod on the New” in 1999 dropping the “t” from Nesselrodt as a Bed & Breakfast. The Gillespies gave all the guest rooms themed style names while remodeling the estate and adding important features to attract events and travelers.

The Gillespie’s decided to move in 2008 and sold the estate back to the Thomas family as Dr. Joe Gianfortoni and his wife Emily, who is Grace Nesselrodt Thomas’ granddaughter. The estate continued to function as an event venue and Bed & Breakfast, under a third party, until falling on hard times in 2019. Jeff Caldwell purchased the property in 2021 and began restoring and reviving the venue to be a destination in the New River Valley and beyond. As a child, Jeff remembers Mrs. Thomas’ cakes when visiting a family nearby. With deep ties in the community, Jeff wants to make your experience at Nesselrod unforgettable.

A Radford native, Jeff grew up in Radford and graduated from Radford High School in 1988. Jeff continued his education at New River Community College and the University of Tennessee. He remained in Knoxville, TN starting his own business designing after market products for the automotive industry. In 2004 Jeff moved back to Radford to be closer to friends and family. His love for Claytor Lake lead him to working with The Friends of Claytor lake for close to 12 years.

In 2021 Jeff left The Friends of Claytor Lake to purchase and re-open the Nesselrod on the New Bed & Breakfast and event venue. “It’s exciting to bring this venue back to life and be a valuable asset to the people and communities around the New River Valley”.

The Thomas House at Nesselrod on the New includes five cozy guest suites each with a unique design and name. On the main level is a graciously decorated living room and dining room to relax and socialize; a guest suite; kitchen; den, with access to the Veranda; and a powder room. On the second floor there are three charming guest suites. Another suite is accessed through a private garden, separated from the house for more privacy but with all the access to common areas.

Walking the grounds of Nesselrod on the New is breathtaking. There are four separate outdoor event spaces that can be used individually or combined to make your experience your own!

The Thomas House Built in 1939

The Thomas House is a 5 bedroom, 5 bathroom home, with a full kitchen, dining room, and living room. Overlooking the New River, the large stone veranda has a partially covered seating area, making this the perfect choice for entertaining your guests, wedding parties, small business, or social gatherings. 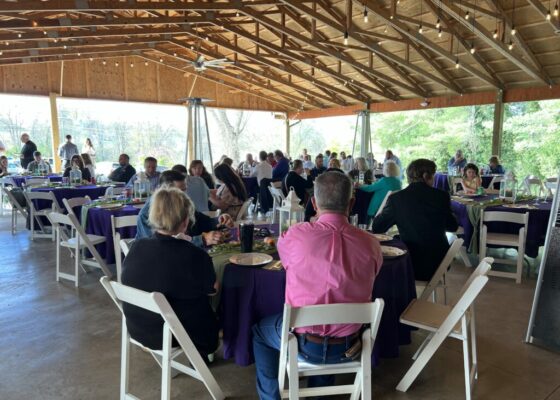 The Pavilion is a wonderful large covered outdoor entertainment center capable of seating up to 150 of your guests. This large, flexible space provides restrooms, a small stage, and adjacent facilities for catering and other amenities.

The Gazebo is the perfect place for your wedding! Large and gracious, the tree enclosed lawn can accommodate seating for 150 guests. With a straight walkway from the Thomas House, the bride will make an elegant entrance! 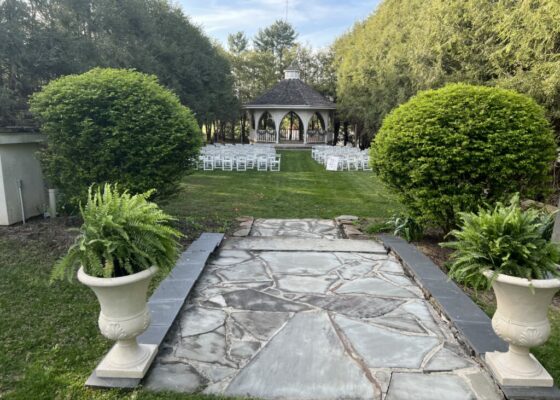 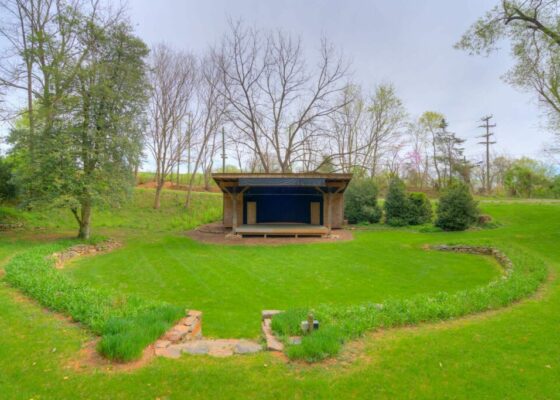 The Sunken Garden is a amazing open entertainment venue just down from the Pavilion. The stage-on-the-lawn location is a beautiful place for your wedding, live bands, movies, dramatic productions, etc. Host your event here, or in combination with Garden/Pavilion events to create your perfect experience.